Weak Cervix in Pregnancy - What Are The Treatments For Cervical Insufficiency?

Pregnancy in every sense is one of the crucial stages for a mother and the developing baby. During the course of 9 months, a lot of things can happen including the condition related to late pregnancy loss. Although all the prospective mothers hope for the best of their prospective babies, some unfortunate women might face undesirable situations. One such is cervical insufficiency. 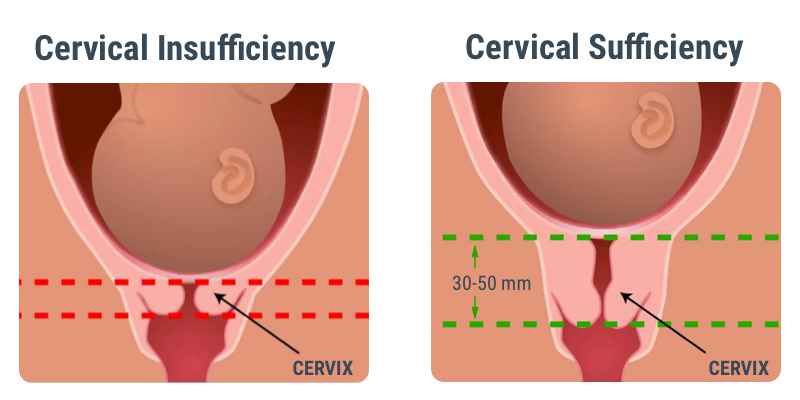 First, it’s important to understand the role of the cervix. Cervix is referred to as a narrow point or passage found at the base of the uterus acting as a crucial part of the reproductive system. The cervix acts as a barrier against vaginal microorganisms during pregnancy. When the delivery period is near, the cervix becomes wider, softer and decrease in length allowing the baby to pass from the uterus to the vagina.

Cervical insufficiency, also known as incompetent cervix means that the cervix is weak and becoming wider and is opening too early before the pregnancy has reached its full term. When this untimely or premature widening (dilation) and reduction in length (efface) is not detected early, it can cause loss of pregnancy or preterm infant. This is due to weak cervix that can’t bear the pressure from within the uterus.

How common is cervical insufficiency?

It is estimated that about 80 percent of all the miscarriages happen in the first trimester. A small number of women will suffer pregnancy loss in the second or third trimester. Out of these late-term pregnancy loss, 1 in 4 will be a result of cervical insufficiency.

Cervical insufficiency is usually caused by abnormalities in the cervix or uterus. These abnormalities can be a result of cervical damage resulted from previous delivery experience. It can also occur due to trauma caused by some cervical procedure such as laser ablation (to remove tissue from the body) or cold knife biopsy (for treating abnormal cervical tissue).

Some research also suggests that cervical insufficiency or incompetent cervix might be more in women who have had multiple dilation and curettage (D & C) procedures. Dilation and curettage is a common surgical procedure performed to complete a miscarriage when uterus fails to empty contents of the failed pregnancy.

What factors can affect cervical length in pregnancy?

There are various factors that can influence cervical length during pregnancy. These include:

How cervical length is determined?

A pregnant woman might not experience any signs or symptoms of cervical insufficiency. A few women might face mild discomfort over the course of days and weeks. However, one must look out for following signs between 14th and 20th week of pregnancy:

How cervical insufficiency is diagnosed?

Cervical insufficiency is very difficult to diagnose. In fact, it is uncommon and doctors do not typically check for this condition during routine examinations. However, they may check women with a history of second and third-trimester miscarriages and some known uterine abnormalities.

Treatment is generally focused on management of cervix insufficiency and to prevent the risk of premature birth. These include:

This is usually recommended to women with history of premature birth. If you are one of those, then you would get a weekly injection or daily vaginal medication of progesterone hormone during the second trimester.

This is a surgical procedure performed on pregnant women of less than 24 weeks or who have history of premature delivery. During this surgery, the cervix is stitched closed with strong sutures (thread). These sutures will then be removed when delivery time is close or during labor.

Depending on the situation, the doctor might use cervical pessary technique for preventing preterm birth. Cervical pessary is a round silicone band that holds the cervix in place until the time of delivery. Currently, studies are going on to determine its effectiveness in the incompetent cervix.

Unfortunately, after a pregnancy loss due to cervical insufficiency, there are definite chances that the problem will reoccur again. So you should frequently consult an obstetrician or gynecologist early in your pregnancy to minimize any complications.

You have successfully subscribed to notifications !